The Cayman Islands is already using Tonnjes' IDePlate and IDeStix technology to link vehicles and plates, locate vehicles of interest, and confirm the identities of vehicles on public roads.

Vehicle license plates with embedded ultrahigh-frequency (UHF) RFID tags are being deployed in Honduras and the Cayman Islands. The plates will help the two countries to identify vehicles and, in some cases, track their movements on highways and other roads. In addition, the Philippines Ministry of Transport this week commissioned the same system for all of its vehicles.

The IDePlate, provided by Tönnjes E.A.S.T., is an aluminum license plate with an NXP Semiconductors UCODE DNA chip embedded by Tönnjes. The company also makes and sells an IDeSTIX adhesive RFID windshield sticker, which leverages the same UCODE DNA chip. The IDeSTIX uniquely identifies the vehicle itself, and can be paired with the IDePlate to detect whether a license plate has been fraudulently attached.

In 2014, the technology was tested during a field trial at the Dutch Ministry of Defense's Driving Education and Training Facility in Oirschot (seeTönnjes, Kirpestein and NXP Complete Yearlong Vehicular ID Field Trial). Since then, it has been deployed in Honduras, where tags are being attached to new vehicle plates as part of a two-year rollout. The system is already in use in the Cayman Islands, with pilots currently under way in Russia and Turkey.

The RFID-enabled plate is designed to be forgery-proof, says Jochen Betz, Tönnjes' managing director. The UCODE DNA IC uses cryptographic authentication based on the Advanced Encryption Standard (AES). Each time a tag is interrogated, it generates a new AES calculation based on its unique crypto key, which the reader receives and is programmed to verify. That ID number can then be linked to data about the vehicle and registration in a database.

By using both the IDePlate and IDeStix, the system enables users to identify any misuse of license plates. The problem with plate identification alone, the company explains, is that it cannot detect if the wrong plate is attached to a car. "Plate theft is very difficult to avoid," Betz states, so the IDeStix provides a level of redundancy. The IDeStix is a hologram-printed windshield sticker that is placed on the window's interior.

The RFID-enabled sticker can be interrogated simultaneously with the plate tag, and can then respond with its own encrypted code that is linked to the vehicle's information. Tönnjes sells the RFID-enabled blank or finished plates to government agencies and offers equipment to emboss a plate number. They can then use their own software to link each tag's encoded RFID number with the plate ID. 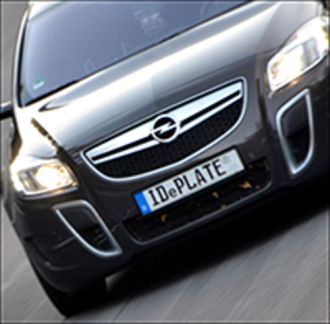