More than 400 license plates are stolen on a daily basis

Bremen, May 2016. According to estimates of the Allgemeine Versicherungs-AG (ARAG),
160,000 license plates are stolen in Germany every year. This comes to an average of 400 thefts
per day. A real problem for entrepreneurs and private persons and considerable extra work for
the administration, since a theft has far-reaching consequences. This includes dealing with
authorities and costs up to 100 for the replacement. If it is a personal license plate, the costs
are even higher. Moreover, the old license plate remains blocked for five years. The company
J.H. TÖNNJES E.A.S.T. from Delmenhorst has developed a solution to the problem with the
IDePLATE. These are license plates with integrated passive RFID chip. It contains a unique and
unchangeable identification number that can be transferred by means of encryption
technology. The safe detection by authorised reading devices complicates the use of stolen
license plates. The technology already used abroad could also reduce the number of thefts in
Germany.
The plate thieves have different intentions. Very often the use stolen license plates for petrol
theft at fuel stations or to get a flawed vehicle through the technical inspection. It would be
possible to put an end to these plans by using IDePLATEs. The so-called “Third license plate”,
which is found on the inside of the windscreen in form of a holographic sticker, provides
additional safety. If the details of the so-called IDeSTIX do not match the ones of the actual
license plate, the system detects this. “Up to now, Germany has neglected to publicly discuss
this technology. Now is the right time for a debate in order not to be overtaken by systems
developed abroad. Among others, the organised theft of high-grade vehicles can be combatted
using the IDePLATE”, explains Dietmar Mönning, Managing Director at TÖNNJES.
In Germany, the introduction of the technology is also conceivable through a test phase, says
Dietmar Mönning with conviction. “In many states the authorities have a positive attitude
towards the possibilities of the IDePLATE. In the Netherlands, a large-scale experiment is being
carried out until the end of the year under the watchful eye of the local ministry of transport”,
he explains. Apart from protection from theft and counterfeiting, the new development has
other advantages. According to statements of the experts, automated entries and exits on
company premises or in parking garages can be organised in a more time and cost-saving
manner. Even during major events such as the upcoming European Football Championships in
France, the security situation could be improved with IDePLATEs. Competent authorities would
be in a position to detect terroristic activities in connection with stolen vehicles at an earlier
stage. 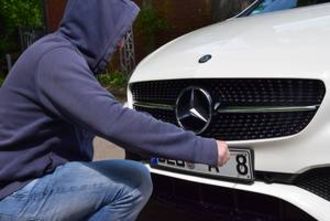