Delmenhorst, December 2018. The German company TÖNNJES has set itself the goal of giving vehicles around the globe an identity, creating a system to connect authorities and motorists, and making the entire process as secure and modern as possible. Its latest acquisition has made TÖNNJES the global market leader: On 20 December, TÖNNJES bought Utsch AG’s share in Utsch Tönnjes International GmbH to acquire the majority stake in the company. Its competitor finally exits the company in the process. While Tönnjes has operated as a technology supplier in recent years, the company is now emerging as a systems provider, offering a one-stop shop for all aspects of vehicle registration and identification, from licence plate production and issuance to the creation of central registration systems. The new group has established subsidiaries at 50 locations outside of Germany, employing around 2,000 people worldwide.

TÖNNJES doesn’t just export its goods; it has adopted a sustainable business model through investments in local subsidiaries. “We have always been a family business and want to develop long-term collaborations with our local partners”, explains Dietmar Mönning, the company’s Managing Director. “That’s what makes us a reliable supplier and producer for each jurisdiction. We take full responsibility wherever we work, e.g. in the US, Canada, Brazil and South Africa. We get to know each jurisdiction and its needs, allowing us to adapt systems to local requirements”. The group also supports the local economy by creating jobs, and significantly shorter transportation routes have a positive environmental impact. The Philippine authorities commissioned TÖNNJES to produce around 5.5 million licence plates and RFID stickers for the island nation at the beginning of 2018. The group carried out this project by establishing a local Joint Venture, where number plates and electronic RFID labels are being produced and personalised for cars and motorcycles.

TÖNNJES continues its international strategy as a system provider

“This acquisition will benefit our partners, authorities and governments”, states Mönning. “It will make us even stronger and more reliable, because we’ve now got a more homogeneous structure, allowing us to make quicker decisions and streamline our operations”. The management team at Utsch Tönnjes International, which will operate under the name TÖNNJES INTERNATIONAL GmbH from now on, will also remain in place.

The group looks set to continue its successful strategy: “We want to use our international experience and local presence to make the identification of vehicles as modern and secure as possible”, explains Mönning. And TÖNNJES is already pursuing this goal by researching and developing technologies in line with Industry 4.0. The world’s first ever fully-automated licence plate production plant is currently being developed at the Italian Mint, and an intelligent embossing system (IDePRESS) is being used in Dubai to stop vehicle licence plates being given the wrong numbers. The automation and integration of embossing robots (IDeROBOT) ensures maximum security. “Our machines can’t be manipulated, so every stage of the production process can be traced – even when our licence plates are on the road”, explains Mönning.

TÖNNJES digitalises its number plates to make them forgery-proof: The so-called “IDePLATE” is a licence plate with an integrated passive RFID chip (Ucode DNA), containing a unique encrypted identification number that can be decoded by authorised readers and compared against governmental databases using electronic vehicle identification (EVI). “This invention is the first of its kind around the world”, says Dietmar Mönning. “It’s going to revolutionise vehicle identification”. The system is completed with an RFID windscreen sticker, the IDeSTIX, to prevent the manipulation of number plates, the forgery of validation tags and the misuse of stolen licence plates. IDePLATE and IDeSTIX can already be found on vehicles in many countries.

TÖNNJES is developing its products in cooperation with two companies that are also global market leaders in their respective fields: NXP Semiconductors is the company behind the Ucode DNA chip (the RFID chip integrated in the IDePLATE and IDeSTIX); and Kathrein is the manufacturer of satellite and antenna technology that developed the hardware used for electronic vehicle identification. 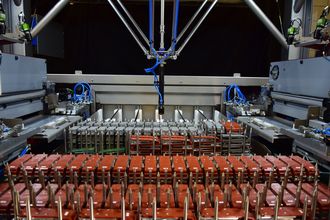