Bremen, June 2017. German number plate manufacturerTönnjes E.A.S.T. has developed the number plate of the future together with its cooperation partners NXP Semiconductors and Kathrein. Many years’ development work has now resulted in the visionary IDePLATE system which incorporates a number plate with an integrated RFID chip (radio frequency identification) and the associated reading devices. For the realisation of this technology, three companies pooled their specialist industry expertise under the direction of Tönnjes E.A.S.T. The automatic and contactless identification and authentication via electromagnetic waves guarantees the protection of individual vehicles and, “could, for example, assume transport management systems, access solutions in environmental zones or the control of traffic light systems with only one medium, the IDePLATE,” says Thomas Brunner, Head of the Kathrein RFID division. The cooperation offers an integral concept for controlling the growing number of vehicles with view to identification, authentication and access controls. “It is a ground-breaking development which has immense potential,” says Dietmar Mönning, Managing Director of Tönnjes E.A.S.T.

Tönnjes has been manufacturing number plates since 1962 and has optimised both the materials used as well as the safety features during the years. Now, with the development of the IDePLATE, the company is taking a step further towards the digital future. One component of the system, the RAIN RFID chip, which is integrated in the number plate, is produced by the RFID technology expert, NXP Semiconductors, based in the Netherlands. “The UCODE® DNA system which is used combines a transmission range of up to 15 metres with revolutionary cryptographic encoding,” explains NXP Marketing Director Mahdi Mekic. Whilst in the past, a balance had to be found between a large reading distance and functional safety, NXP now creates a combination of the two elements. The increased range enables fully automated toll booths and speed controls which, at the same time, protect driver data. The necessary encoding occurs with the aid of the infrastructure provided by Kathrein. This offers an innovative linkage of RFID write/read device and a so-called IoT gateway whereby data can be loaded into a Cloud and then used from here. As the world’s biggest antennae manufacturer, the Rosenheim-based company is continuously developing this technology. “In Bavaria and Saxony, we are working daily on the reader and are focussing 100 percent on Germany as a location for innovation,” said the Head of Kathrein RFID, Thomas Brunner.

According to the Allgemeinen Rechtsschutz-Versicherungs-AG (ARAG) (German legal protection insurance company), approximately 160,000 number plates are stolen in Germany every year. This is often only the first stage of more far-reaching crimes which lead to extensive risk situations for the public. Here it is not only private individuals who come to harm but also the state: non-authorised vehicles which remain unidentified due to stolen or manipulated number plates also represent huge tax losses. In the USA, for example, the revenue department loses up to 1.5 billion dollars a year in this way. Dietmar Mönning also criticises the situation in Germany: “With the current methods, too many criminals are getting away unpunished. These circumstances don’t ensure sufficient security and, when it comes down to it, it is the tax payers that have to pay for this.” In contrast, the fraud resistant data memory of the IDePLATE enables the clear identification of vehicles and prevents thefts and fraud. The RFID technology forms the basis for many future oriented usage possibilities which are already being used abroad. In Kenya, for example, a country in which the gross domestic product is continuously growing and where more vehicles than ever were registered in 2014, the German RFID identification system has already impressed many. By 2020, a central registration databank will be set up here which will ensure that not only the roads but also auto trade are safer. The system has also been successfully used on the Cayman Islands: here it is planned that the entire state administration as well as the associated vehicle fleet will be equipped with the IDePLATE in the next two years. “Tönnjes is a typical ‘hidden champion’ and a good example of how Germany can generate and export progress through its businesses,” says CDU parliament member Astrid Grotelüschen. The technology of the Delmenhorst-based company and its partners could represent an important step in making cities more efficient, environmentally friendly and, with this, developing them more towards “smart cities”. The IDePLATE also opens up new opportunities in association with the increasing digitalisation which is why it is important to shape pioneering innovations in a responsible way and support their development,” she says. 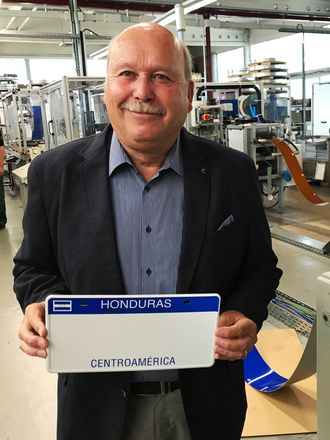