Delmenhorst/Cairo, September 2020. On Monday, the Arab Organization of Industrialization (AOI) – one of the largest industrial companies in Egypt – and the German company TÖNNJES signed a contract for a joint venture in Cairo: A local production facility will be created, in which the North African nation will manufacture all of its license plates in the future. That means not only 60 new jobs at the site, but also a factory in which the most modern technology, such as embossing robots, will be used. AOI had already decided on TÖNNJES as a partner last year. The technological expertise, the many years of experience and the cooperation strategy that the company has implemented abroad were the decisive factors for the Delmenhorst-based world market leader in the competition for selection of a partner. “Instead of just exporting, we invest in local joint ventures and develop the market together with our local partners", says Markus Müller, CEO of TÖNNJES. "That’s what ultimately convinced AOI."
Every year between three and four million license plates leave the new production facility in Cairo to be handed over to vehicle owners at the respective registration offices. The license plates are then embossed by IDeROBOTs made by TÖNNJES. These highly automated embossing systems are already in use in Dubai, Italy and the Philippines, among other locations. A crucial part of the production and personalization is automated, which means more efficiency and less material waste.
Brazil, USA, Switzerland: TÖNNJES has a presence in over 50 locations around the world – always by investing locally. This means that the company sets up joint ventures with local shareholders. This successful concept strengthens the economy in the respective country, thereby creating jobs and ensuring reliability. “The pandemic in particular illustrates the advantages of this strategy. The companies can still act and are largely independent – even if supply chains break down,” explains Müller. That is why TÖNNJES continues to invest abroad despite the difficult global economic situation.
The signal to start the project was the signing of a cooperation agreement with AOI at the “Compact with Africa” conference in Berlin in November 2019. Representatives of African states and the G20 countries spoke in the Chancellery about how the conditions for private investment in Africa can be improved. With the new production facility in Egypt, the state is now becoming less dependent on imports and paving the way for further steps towards digitization.
TÖNNJES has already set up several joint ventures on the continent, for example in South Africa, Senegal and Kenya. In Kenya, vehicles are even equipped with the IDeSTIX RFID windshield sticker, part of the IDePLATE system. The IDePLATE is an electronic license plate with an integrated RAIN RFID chip that can be authenticated by authorized readers in
Press release stationary and flowing traffic. This enables smart mobility applications such as toll systems, access controls or traffic management. 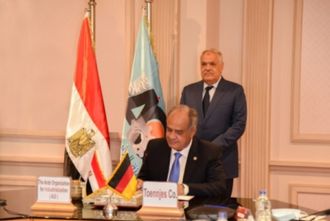