Delmenhorst, February 2020. In order to accelerate economic and political development processes, Latin American states joined together at the end of the 20th century to form the Mercado Común del Sur, or MERCOSUR (Common Market of the South). These currently include Argentina, Brazil, Paraguay and Uruguay, as well as associated countries such as Chile and Peru. In order for the Community to have an impact on vehicles as well, the Member States have until 2023 to exchange their license plates at national level and introduce the new MERCOSUR licence plate. Now it is Paraguay’s turn, and together with TÖNNJES – the German manufacturer of security license plates – they are implementing the project locally. “Around 2.3 million vehicles are gradually being fitted with new license plates, which are significantly more advanced both visually and in terms of security,” says Stephan Wüstefeld, Managing Director of the company.

MERCOSUR specifies the requirements that the new license plates must meet. “This naturally includes the MERCOSUR symbol, the flag and the name of the country,” explains Wüstefeld. The security features include watermarks, a security wave line, a holographic Car Plate Label with digital signature acc. to ISO/IEC 20248 and a reflective film. “This is a high-security film,” explains Wüstefeld. “It is characterised by being highly reflective. So the new license plate reflects much more than the old one.” In the past, rear-end collisions in the dark were quite common in the country because drivers noticed broken down or parked cars too late.

So that the vehicle and license plate can be clearly authenticated, TÖNNJES has also integrated a holographic Car Plate Label into Paraguay’s MERCOSUR license plate. This is provided with a barcode and a serial number, which makes the label electronically identifiable. “A cross-check with the official central register is possible at any time, and the label makes the identification mark a unique, authentic document that is forgery-proof,” says Wüstefeld. Should anyone try to pull the label off, it will destroy itself.

With its joint ventures, TÖNNJES is represented at more than 50 locations around the world and is a leader in the field of electronic vehicle recognition. The innovative security license plates are used around the globe. This includes the IDePLATE system, which consists of car license plates and windscreen stickers with integrated RAIN RFID chips that can be read by authorised readers in both stand-still and moving traffic. 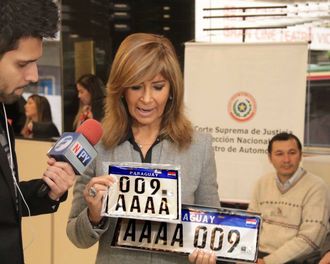