Delmenhorst, November 2019. If you want a car number plate in Germany, you can buy your desired registration plate in a shop or online without any proof of identity. Only the stamp seal, i.e. the official seal of the registration authority, makes it a valid number plate on the vehicle. According to Allgemeine Rechtsschutz-Versicherungs-AG (ARAG), around 160,000 car number plates are stolen every year. ‘This is because the identification of the vehicle is done solely by means of visual features’, declares Olaf Renz, managing director of TÖNNJES. The company has developed a digital, RFID-based alternative called ‘IDePLATE’, which Dr Günter Krings, Parliamentary State Secretary for the Federal Minister of the Interior, and Astrid Grotelüschen, member of the Bundestag, have now also learned more about in the production facilities in Delmenhorst.

At first glance, the electronic car registration plate from TÖNNJES looks like a conventional number plate. It corresponds to the DIN standard but contains a cryptographic RFID chip that is barely visible externally. A multi-encrypted identification number is saved on it that can only be recorded by authorised reading devices in contactless form, in stationary and moving traffic. If necessary, the police can compare it with a national database and thus check the vehicle details.
‘Manipulation or misuse would be impossible with the IDePLATE’, says Renz. Parliamentary State Secretary Günter Krings considers the innovation from TÖNNJES to be a worthwhile alternative: ‘Our car registration plates should become more secure in future. The use of digital and cryptographically protected car registration plates can considerably improve the protection against forgery of the registration plates’, says Dr Kings. According to the politician, ‘now the goal is to establish its practicality in pilot projects’.

TÖNNJES’ IDePLATE system is already in use in various places around the globe. Countries such as the Philippines, Kenya and Honduras have already equipped their vehicles with the electronic registration plates. For the identification of cars and motorbikes, many draw on the IDeSTIX from TÖNNJES. This is a windscreen sticker that also contains a cryptographic chip and works like the IDePLATE. ‘The combination of the two registration plates ensures a maximum of security’, explains Renz. Ultimately, a reading device would thus detect directly whether the right registration plate is attached to the vehicle. ‘Constant innovation preserves sustainability as the company TÖNNJES proves with its development. With its diverse options for use for modern and intelligent solutions, RFID technology can be an additional component’, says Astrid Grotelüschen about the IDePLATE from TÖNNJES that would also be suitable for
additional applications such as toll, parking or payment systems. Worldwide, the company employs around 2,000 staff at more than 50 locations together with its partners. 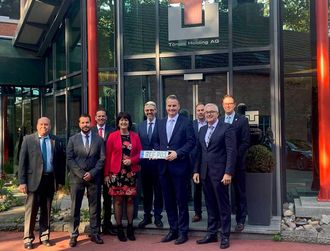