Berlin, November 2019. More cooperation with African countries and higher direct investments by local companies to strengthen the regional economy – these are the aims of the conference “Compact with Africa”, which took place this week in Berlin. Representatives of the G20 countries along with the African states discussed in the Chancellery how the conditions for private investment in Africa can be improved. Technology supplier and system provider TÖNNJES, represented at more than 50 locations worldwide, has now signed a cooperation agreement with one of the Compact countries: together with an Egyptian state-owned company, a joint subsidiary is to be created in Egypt for the production of licence plates.

Federal Chancellor Angela Merkel stressed during the two-day conference that Africa is a continent that offers “more opportunities than risks”, and said: “We should do everything we can to cooperate with Africa.” According to German Development Minister Gerd Müller (CSU), business enterprises should be more “courageous” in investing in Africa. TÖNNJES sets a good example here: the Delmenhorst-based company has already established several joint ventures with African partners in the past – including in Senegal and Kenya – thereby strengthening the local economy and creating local jobs. “We have had very good experiences on the continent so far,” emphasises TÖNNJES Managing Director Markus Müller, who at the conference sought dialogue with representatives of African states for further cooperation. “We are delighted to have signed a cooperation agreement and to be able to extend our commitment to Egypt.”

Under its president Abdel Fattah Al-Sisi, the North-East African state is more interested than ever in developing local industry and is one of the twelve Compact countries currently implementing reform programmes to improve framework conditions and make its own economy more attractive to foreign investors. “There is strong potential in Egypt to become less dependent on imports through its own production facilities,” says Markus Müller. Licence plates are currently imported from abroad. “Together, we’re planning a branch in Egypt where licence plates can be manufactured locally.”
Both parties have also agreed to seek further ways to intensify cooperation. Currently under discussion: whether electronic IDs (IDePLATE) might also be introduced in the future. TÖNNJES’ IDePLATE system is already in use in various places around the globe. Countries such as the Philippines, Kenya and Honduras have already equipped their vehicles with this unique technology, which solves traffic problems and can be used for toll, parking and payment systems. 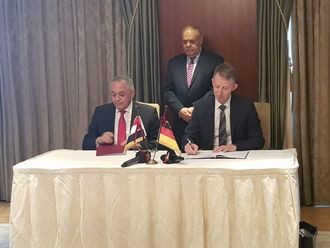