The companies found that a system combining passive UHF RFID and digital camera technologies could identify 98 percent of vehicles—including battle tanks—passing through portals at high speed.

Vehicle registration and identification technology company Tönnjes, license plate manufacturer Kirpestein B.V. Automotive and RFID chipmaker NXP Semiconductorreport that they have completed a trial that proves passive ultrahigh-frequency (UHF) RFIDlicense plates can effectively identify moving vehicles even in the most challenging environments. The three firms put the technology to the test at a Netherlands military base, via a variety of heavy military vehicles moving at high speeds to simulate some of the most difficult circumstances in which license plates might need to be read.

The test was carried out during the course of one year to determine whether agencies, such as vehicle registration departments in the Netherlands and throughout Europe, could employ Tönnjes' IDePLATE technology—which incorporates an RFID tag into a metal license plate—to identify vehicles as they move through RFID reader portals. Throughout the yearlong field trial, the companies used IDePLATE and IDeSTIX RFID tags made by Tönnjes and containing NXP's UCODE DNA UHF RFID chips. Tönnjes also supplied integration and software to manage data from the reader, as well as an automated camera. Kirpestein used the IDePLATE specifications to integrate a UCODE DNA chip into each of its license plates utilized during the test. All 100 of the vehicles involved in the testing were fitted with IDePLATE license plates, as well as with IDeSTIX adhesive RFIDstickers, which are designed to be attached to windshields. 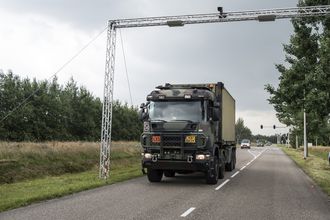