TÖNNJES and Kathrein impress customers and public officials at the Sachsenring

Delmenhorst, May 2019. The German company TÖNNJES has developed a revolutionary system for electronic vehicle identification (EVI) with its cooperation partners Kathrein and NXP. The group presented its innovation to customers and public officials from over 30 nations during a performance test at the Sachsenring in March – even managing to beat its previous performance: The RFID-based technology can detect and authenticate vehicles at speeds of up to 220 km/h. This is made possible by the “IDePLATE” and “IDeSTIX” solutions developed by TÖNNJES. The IDePLATE is a vehicle licence plate with an integrated passive RAIN RFID chip made by NXP (Ucode DNA). The IDeSTIX is a windscreen sticker that also has an integrated Ucode DNA chip. Both feature a unique, multi-encrypted identification number that can only be decoded by authorised readers. This can be compared with state databases to reveal vehicle information.

TÖNNJES and Kathrein rented the Sachsenring racetrack to show their IDePLATE system in action in the most realistic conditions possible. Around 90 participants watched as several cars, lorries and motorcycles recreated various traffic scenarios and were detected by a reader and camera attached to two overhead bridges. “While camera-based systems can only identify 65 to 70 percent of vehicles in adverse weather conditions and poor visibility, their success rate increases to around 99 percent when used in combination with the IDePLATE and IDeSTIX”, explains Jochen Betz, Managing Director at TÖNNJES. This type of identification lets the authorities determine whether a licence plate actually belongs to a vehicle or whether it has potentially been manipulated. “Following improvements to the hardware and software developed by Kathrein, vehicles can even be authenticated at very high speeds”, states Betz. This was demonstrated to great effect with motorcycles. “Our IDeSTIX headlamp sticker with an integrated RAIN RFID chip significantly boosts the identification rate, as it enables motorcycles to be detected from the front”, says the Managing Director.

TÖNNJES’ mission is to give vehicles an identity and create a system that connects motorists and public authorities. Its cutting-edge products are used all over the world. The event at the Sachsenring was attended by representatives from Africa, Asia and South America, who were all impressed by the German technology. The IDePLATE system has a wide range of applications, such as traffic management systems, low-emission zones, car parks, toll roads and access controls. The contactless solution can even be used in moving traffic. “One visitor from South Africa was looking for a solution to prevent the misuse of fuel cards. If the vehicles in his fleet could be refuelled using a RAIN RFID chip, he’d be able to ensure the petrol only went into the lorries themselves”. That wouldn’t be a problem with the IDePLATE and IDeSTIX. 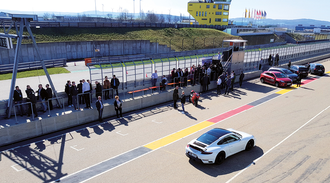