Cairo, October 2022. Egypt is localising its license plate production: On 16 October, the new production facility in Cairo officially opened, where all of the country's vehicle license plates will be manufactured in the future. The high-tech factory is a cooperation between the international market leader for electronic vehicle identification, TÖNNJES International Group GmbH from Northern Germany and the Arab Organization for Industrialization (AOI) from Egypt. The joint venture will produce three to four million license plates per year for the Egyptian Ministry of the Interior on site.

Presentation for politicians and the press

"We are proud that we can now present our latest joint venture to the public and give an insight into our work in Egypt", explains Markus Müller, Managing Director at TÖNNJES. In addition to ambassadors from neighbouring countries such as Mali, high-ranking Egyptian politicians General Mohamed Salah El Din, Minister of State for Military Production, his predecessor General Mohamed Ahmed Morsi and Dr. Eng. Mohamed Abdel Karim, President of the General Authority for Industrial Development made their way to the opening ceremony. The German Embassy was represented by the Head of the Economic Department, Alexis Below. After a speech by Major General Eng. Mokhtar Abdelativ, President of the AOI, the guests were allowed to learn more about the production of the license plates during a tour of the halls. General Abdelativ praised the good cooperation with the German partner company in front of the numerous press representatives and the advantages that will result from the technology transfer in the future. Finally, Mirjam Weber, Sales Director at TÖNNJES, showed the TÖNNJES RAIN RFID-based recognition system for electronic identification of vehicles including IDePLATEs.

More flexibility and speed through technology - made in Germany.

Egypt relies on the expertise from TÖNNJES. The new production facility covers the current license plate requirements of the African state and operates independently and flexibly. Since both the AOI and TÖNNJES expect the market to grow, the joint venture is designed for larger production capacities and offers possibilities for expansion. "The fully automated production also ensures high quality and efficiency. We can largely exclude errors in the manufacturing process. Material losses remain low," explains Mirjam Weber.

In the new factory, which is located on the AOI premises, TÖNNJES uses its own IDeROBOT embossing robots for this purpose, which emboss the license plates fully automatically. TÖNNJES has already successfully put the IDeROBOTs into operation at other license plate production facilities in Italy, Dubai or the Philippines. In addition, 60 jobs will be created in Cairo. "This makes Egypt less dependent on imports and creates jobs," Mirjam Weber continues.

The starting signal for the joint venture in Egypt was given by the companies involved when they signed a cooperation agreement during "Compact with Africa". In November 2019, representatives of the African states and the G20 countries met at the German Chancellery to discuss cooperation and investment in Africa. An approach that is not new to TÖNNJES: The market leader for electronic vehicle identification (EVI) operates in more than 50 locations worldwide with joint ventures that strengthen the local economy and ensure reliable deliveries.

In addition to the IDeROBOT embossing robot, the Delmenhorst-based company develops the in-house RFID number plate IDePLATE and the windscreen sticker IDeSTIX. The number plates have RAIN RFID chips with a unique identification number that can be read by authorities in stationary and moving traffic and compared with a vehicle database. The technology enables smart mobility applications such as access control or toll systems.

Further information on EVI and more on the various application areas can be found at www.electronic-vehicle-identification.com 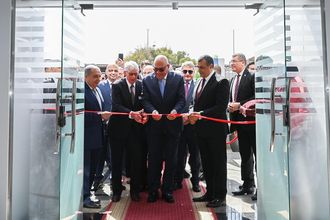